After creating a technology and company that disrupted the landscape of Conversational AI and our expectations of what AI can be in practice, I wrote this book to chronicle the journey and the counterintuitive DNA of Clinc that underlies its success.

This book is for the dreamers who want to have impact on the world with technology and provides the insights that got me there and how they were put into practice. I’m humbled to have had the opportunity to work with phenomenal people, and lead a company that in ~4 years grew from 0 to 130 people, realized a $200m dollar valuation, averaged of 3.2x year over year revenue growth (GAAP ARR), and was experienced by 10s of millions of users. Clinc realized this success working on a hard “holy grail” problem of our generation, one that Google, Microsoft, Apple, and Amazon were spending billions to establish dominance.

I also wanted to write this book to inspire folks who are from an unconventional background to build something that can change the world, and illuminate my perspective on how to engage and grapple with giants to realize success with disruptive ideas. This book tells the story of how a black kid from the Caribbean who attended Detroit area schools navigated and ascended the echelons of computer science to make an impact, and it’s my hope that this story encourages others to believe in themselves and create a positive effect in the world.

To order “Breaking Bots: Inventing A New Voice In The AI Revolution” in both hardcover and Kindle Editions. Click HERE

In Breaking Bots: Inventing a New Voice in the AI Revolution, Jason Mars expresses controversial insights on the surprising progress in AI and what the future holds while deconstructing the DNA that underlies true AI innovation and disruption. Examining the human epoch from the perspective of our relationship to technology, Mars’ unique insights capture the development of sophisticated AI as the next historic leap in our evolution, one exponentially more transformative than the Industrial Revolution or the Bronze Age.

Written in a style that invites everyone to join the AI revolution, Breaking Bots reveals the past, present, and future of the AI revolution through Jason’s unlikely journey to AI stardom, providing key learnings along the way. Readers will gain insights into the paradigm-shifting technical and cultural DNA that underlies Jason’s work and Clinc, the company he started and grew to astonishing success. Learn the origin story, key ideas, and core philosophies driving the  future of AI, while discovering the unique role each one of us can play in the impending AI revolution.

If you want to learn more about what’s next for AI and join Jason in the AI revolution, visit https://www.jasonmars.org/ or https://www.breakbots.com/

Human eras become defined by their technology. Our history is dotted with time periods such as the Mesolithic Era, the Bronze Age, the Industrial Revolution. Historically, we conquer one technology gradually and then take measured steps to the next. That model was thrown out the window with the Technological Age. In our current era of rapid, exponential growth, artificial intelligence is the next evolution not just of technology but perhaps of existence itself. In Breaking Bots: Inventing a New Voice in the AI Revolution, Jason Mars expresses the surprising progress in AI and what the future holds.

Jason Mars: Why Switch? Reasons I Joined Faculty at U. Michigan from UCSD

The search chair of my CSE department at U. Michigan[...] 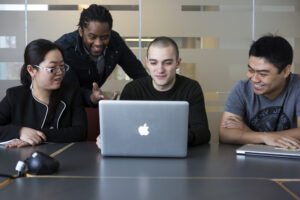 An open-source computing system you command with your voice like[...]

Your email is safe with us.

Cancel Reply
“It is the power of the mind to be unconquerable.” ― Seneca

Type and press Enter to search